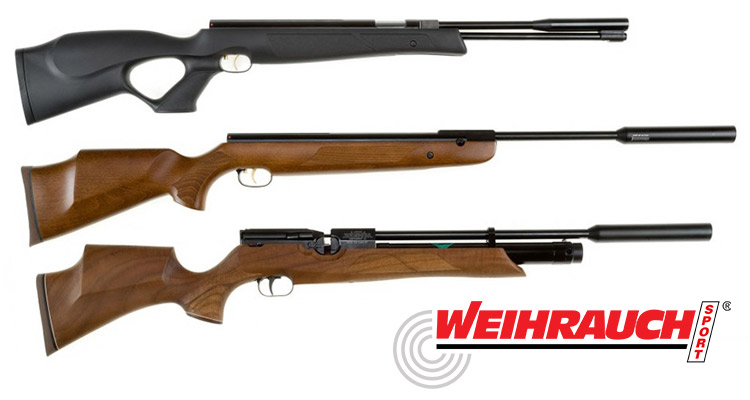 Weihrauch are one of the most well known air rifle manufacturers in the world and are the go to gun for many hobbyists and professionals alike. In this article, we are going to get into a brief history of the company, talk about some of their unique selling points and give our reviews on some of the top Weihrauch air rifles. So without further ado, let’s jump right into the history of Weihrauch.

The company was started in the 1890s, in the same German town where many other famous gun makers were based including Walther and Anschütz. They soon became well known for their exceptional hunting rifles.

Move forward to the 1950s and it’s Hermann Weihrauchs’ son of the same name who is making a name for himself as a gifted gun manufacturer. In 1955 Hermann Weihrauch juniors company manufactured the Weihrauch HW35. This was the first model to feature their now world famous Rekord two stage sporting trigger.

The Weihrauch HW35 has been in continuous production up until modern day and is still included in the company’s range. The Rekord two stage sporting trigger is still a feature in all of the Weihrauch air rifle range and is still in its original form.

During the 1970s, there was a collaboration between Weihrauch and the American importers Beeman Precision Airguns Ltd. to manufacture a new, high powered air rifle. This model was based on the Weihrauch HW35 except it was much larger and had increased fire power. The rifle they made was the Weihrauch HW80 (called the Beeman R1 in America).

This new improved model was very soon to become the best selling adult sporting rifle, and is reported to have been responsible for bringing the American airgun market into the world of adult airguns.

There are so many great precision rifles manufactured by Weihrauch that have been helping to improve sporting shooters worldwide for many years that we hardly know where to begin. Let’s start with springers.

So let’s go through our most popular models which include:

This is our most popular air rifle by far. It has everything going for it including the patented Rekord two stage sporting trigger. It is also incredibly quiet with its Weihrauch silencer which makes it ideal for hunting and pest control. It also has an easy break barrel which is made even easier by the length of the barrel.

We are very impressed with the Weihrauch HW 95 K and we know you will be too.

The Weihrauch HW 80 K is their best selling break barrel rifle and comes with all the features you would expect from German engineering coupled with American design. They describe the Weihrauch HW 80 K as the workhorse of their range, and the monte carlo stock is favoured by hunters and precision target shooters alike.

This air rifle comes top in many online polls about the best, most accurate sporting rifle. To see what Hard Air Magazine said about the Weihrauch HW97K click here

It’s well balanced, easy to cock and load, and has the world famous Weihrauch Rekord trigger. The Weihrauch HW 97 K also has a fixed barrel system which is one of the reasons for its great accuracy.

It’s also worth pointing out that there’s the Weihrauch HW 97 KT Tactical model which is more popular among the target shooting fraternity. To see the full range of Weihrauch HW 97 K models we stock and a greater explanation of them all click this link.

In some cases the spring air rifles lose accuracy due to breaking the barrel (which will have a certain amount of play) this is not applicable with Weihrauch rifles though. It just comes down to convenience and preference with such a reliable manufacturer as Weihrauch.

This is the first pre charged air rifle from Weihrauch and it has a full length barrel which gives a great shot count. Vibration free shot release, fast and easy repeating and a 14 shot magazine. In our opinion the Weihrauch HW 100 is the finest all round PCP air gun on the market today.

Target shooters are impressed with the HW 100 and many national level competitors rely on them for their impeccable accuracy.

Another great gun from this very reliable and world renowned manufacturer.

This is the pre charged version of the ever popular HW 100 series. Features include the new weaver type scope mount with integrated cocking lever which is available in both left and right hand types. It also has a soft touch finished ambidextrous stock and adjustable butt plate.

Weihrauch have also started to manufacture gas ram air rifles, but to date – they only appear to do one model on the market.

Weihrauch use their unique Theoben gas ram system for this model, and it has the precision adjustable trigger with automatic safety. It also has a new stock design with an extended forearm and a high cheek piece.

Where Can I Buy Weihrauch Air Rifles?

You can buy Weihrauch air rifles direct from us at The Airgun Centre, or any other licenced gun dealer who holds their range. Weihrauch do not sell air guns from their website.

Buying your Weihrauch air rifle through The Airgun Centre means you’ll be getting our unique lifetime guarantee, which means that as long as you’re the original owner – your gun is fully guaranteed for life. If you have any problems with your air rifle (what so ever), you’ll be able to bring it into our store and get it fully repaired – free of charge.

This guarantee covers both parts and labour, meaning you don’t have to worry about any hidden charges when it actually comes to getting it repaired.

Plus we will also service the rifle whenever you feel it needs it, completely free of charge to keep it shooting in tip top condition for as long as you’re the owner.

About The Airgun Centre

The Airgun Centre is one of the most popular air rifle shops in the UK and has hundreds of air rifles on display for you to come and look at. We stock all the major airgun manufacturers, including: Weihrauch, BSA, Brocock, Air Arms, FX Guns, Daystate, Walther and more. We also have a variety of finance options that allow you to buy your Weihrauch air rifle now, and pay for it later.

If you would like to talk to a member of our team about Weihrauch air guns, or anything else air rifle related – give us a call now on 01268 780 730 and take advantage of our 40 plus years experience in the air rifle industry.

Order your air rifle by 4PM Tuesday and have it delivered to your home at the weekend!

By hiring a team of RFD’s, we can now legally deliver rifle combination packages with filling equipment with air inside – direct to homes in mainland England & Wales (RFD collection only in Scotland).

The best part? Delivery costs just £25, with NO handover fees!

Plus, we’ll even give you a call after you place your order to let you know when your rifle will be arriving. Allowing you to go about your weekend, without having to wait by the door.

To get your air rifle delivered to your home, simply select “Home Delivery” at the checkout.

Order through our SSL secured checkout and collect from our shop in Rayleigh – safe and FREE!

The fastest way to get your air rifle is to order online through our SSL secured checkout and collect in person from our shop in Rayleigh.

It’s completely free, and you won’t need to break any of the social distancing rules to collect your gun – keeping you safe and saving you money.

Don’t Want To Travel? Collect From Your Local RFD

If you need your rifle as fast as possible, you can order online today and have it delivered to your nearest RFD (Registered Firearm Dealer) for collection.

We have a comprehensive network of RFD’s throughout England, Scotland and Wales that allow us to deliver your rifle almost to your door (usually within 3 miles) for you to collect at your convenience.

This is a service provided as a favour by your local shop, for which they charge a nominal handover fee of up to £25 – This is payable upon collection of your rifle.

Our delivery charge is just £22.95 and we’ll get your gun delivered to the RFD by the times shown below (subject to stock levels):

To get your air rifle delivered to your nearest RFD, simply select “RFD Collection” at the checkout.

Note: Customers in Scotland, please make sure you have your air gun permit before purchasing. This does not apply to England & Wales

The AirGun Centre offers a range of finance options to best suit your needs.

Find the product(s) you want to purchase from The Airgun Centre and add them to your basket.

You will be redirected to the finance provider to apply for your finance, once approved your order will be confirmed and prepared for dispatch or collection.

We have 2 finance providers available for you to choose from, DEKO and Payl8r.

Deko is a credit broker, not a lender. Deko’s secure technology helps put you in touch with lenders whose finance options are best suited for you and your purchase. As a customer of The AirGun Centre, your finance application will be with Duologi.

Deko offer a range of finance options to help you spread the cost of your purchase over 12 to 48 months. The value of the loan needs to be over £250 and no more than £15,000. You can choose a deposit of up to 50% of the value of the goods.

How To Apply For Deko Finance

Payl8r can lend based on your affordability alongside your credit history, which allows them to review and accept many customers throughout the UK.

Applying won’t affect your credit score as Payl8r uses a “soft search” when you apply – meaning there’s nothing to lose!

How To Apply For Payl8r

*Failure to keep up with repayments will negatively impact your credit score.

The Airgun Centre's unique guarantee has been included with all our rifles and pistols for over 40 years now , there are: no catches, no small print and no hidden charges it's as simple as this if your purchase develope's any defect at any time we will repair or replace it completely free of charge this cover's parts and labour (The AirGun Centre Guarantee and service pledge only applies to the original purchaser).

The Airgun Centre's unique free service plan has been included with all our rifle's for over 40 year's , there are no catches, no small print and no hidden clauses it's as simple as this when your rifle's performance goes "off the boil" you simply return it for a service , it's completely free of charge this cover's part's and labour (The AirGun Centre Guarantee and service pledge only applies to the original purchaser).

We stand confidently behind our products, and believe that the goods you purchase from us are the best available on the market. That is why we are happy to provide you with a unique guarantee.

We are proud to have included this as standard on all pistols and rifles sold by us for over 40 years. This gives you complete peace of mind when purchasing from us, meaning you can buy with confidence knowing that if for any reason your product has any defect we will repair or replace it completely FREE.

There are no catches, no small print and no hidden terms and conditions, it really is as simple as it sounds.

This unique guarantee covers both parts and labour, so you can rest assures that when you buy from the best you will get the best. (The AirGun Centre Guarantee and service pledge only applies to the original purchaser).