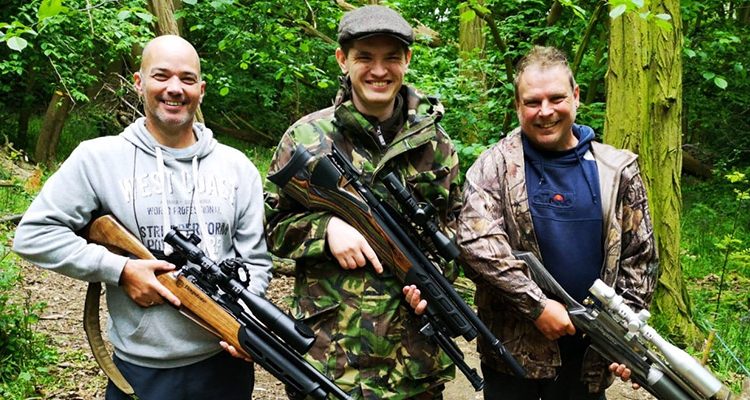 At some point you will accidentally dry fire your air rifle, and you may become worried about it getting damaged as a result. This happens to the best of us, and it’s a common concern. The good news is, there are many air rifles and air pistols that can be dry fired without causing any damage at all, but not all of them…

Check the owners manual, if it’s one that can be dry fired, it will be clearly stated. If not, there are a few things to think about. For instance, what type of air rifle do you have? And what has caused you the need to dry fire it? But before we get into those, let’s clearly define what we’re referring to when we say “dry firing” an air rifle.

WHAT IS DRY FIRING AN AIR RIFLE?

Before we get into why dry firing can damage your air rifles, let’s look at the differences between how springers & gas rams fire pellets, and how PCPs & CO2 air rifles fire pellets.

When cocking a spring powered air rifle, you force a piston that’s located inside the compression chamber to move backwards and compress the spring. Once the trigger is squeezed, the piston is released, allowing the spring to extend back to its uncompressed state.

Gas ram air rifles work in a similar way to springers, except gas is being used to propel the piston forward instead of a spring.

PCP’s and CO2 air rifles fire pellets in a different way to springers and gas rams, as air is not being forced through the barrel from the compression chamber. Instead, CO2 & PCP air rifles use compressed air that’s already stored in an internal tank to propel pellets.

Squeezing the trigger on a PCP air rifle allows a valve to open, releasing a spurt of compressed air to force the pellet up the barrel. CO2 air rifles use the same principles as PCPs, but they use CO2 as a propellent instead of compressed air.

Not exactly the most in depth, technical of descriptions but good enough for us to grasp the basics.

WHAT HAPPENS WHEN AN AIR RIFLE IS DRY FIRED?

Normally when you fire an air rifle, the air resistance caused by the presence of the pellet dampens the force on the piston in forward motion. Slowing it down so that it hits the end of the compression chamber without causing any damage to the piston.

When the air rifle is dry fired, there is no pellet to slow the piston due to air resistance, making the piston hit the end of the compression chamber under much greater pressure. This will cause a certain amount of damage, dependent on the make and model of your gun.

Dry firing PCP or CO2 air rifles will usually be completely safe, as there isn’t a piston to worry about. You’re simply releasing a short spurt of air/CO2 to force the pellet up the barrel. This is very unlikely to cause any damage, and any good manufacturer of PCP or CO2 air rifles that would be damaged through dry firing would make it very clear in the owner’s manual.

AIR RIFLES THAT ARE DESIGNED FOR DRY FIRING

Some air rifle manufacturers have designed guns that can be dry fired over and over. This allows target shooters, in particular 10 metre shooters, to refine their skills by dry firing and getting a better knowledge of their gun.

They focus on their breathing and their brain/muscle control to get the most accurate shots, without having to reload or clean up. This allows them to get more practise time in and improve their shooting.

Which can be very useful for competitive shooters, but remember they have guns specifically designed for that purpose. You will have to check your owners manual or ask the manufacturer if your particular air rifle is safe to be used in this way.

Since the first spring air rifle was manufactured, there have been problems with dry firing. That’s another reason why modern airguns are capable of surviving a few accidental dry fire shots. That said, don’t dry fire for the sake of it unless your gun was designed specifically for it.

We all know that accidents can happen, and you might get lucky and not damage your rifle, but it’s rarely worth the risk if you can avoid it. Remember every time you dry fire, you run the risk of causing serious damage to your springer/gas ram air rifle.

As you may have worked out, due to the way they propel the pellet – it’s relatively safe to dry fire a PCP air rifle.

Some advise dry firing to empty your cylinder, others give a definite “do not dry fire”. If your manual isn’t clear, our advice would be to dry fire down to around 60 bar, then discharge the rest manually. This should avoid any internal damage to your PCP.

The best and most obvious advice would be to check how many pellets you have before cocking, but assuming it’s happened, what then? Well that all depends on how long you’re going to leave it. An hour or so would be fine, however, if it’s longer than that – some people say there is another option.

The advice you’ll often hear is that you can fire a cleaning pellet to discharge the air, but we would instead recommend only firing a cleaning pellet with a regular pellet behind it. This is because cleaning pellets don’t offer enough resistance to slow the piston down, and so you’re back to gambling with the internal mechanism of your air rifle.

Always Use Caution When Firing Your Airgun

If you do decide to go for the cleaning pellet option, take as much care as if you were firing a normal pellet. Cleaning pellets might only be made of felt, but it’s fired under pressure and can still be dangerous. If you don’t have any cleaning pellets and you’re not going to shoot for any length of time, dry firing might be your only option, as leaving a springer cocked for a long period of time can cause your air gun to lose power.

Remember that even with no pellets the air will leave you rifle under considerable pressure, so be safe. Never aim at anyone and always be aware of your surroundings, companions, and any passers by.

Order your air rifle by 4PM Tuesday and have it delivered to your home at the weekend!

By hiring a team of RFD’s, we can now legally deliver rifle combination packages with filling equipment with air inside – direct to homes in mainland England & Wales (RFD collection only in Scotland).

The best part? Delivery costs just £25, with NO handover fees!

Plus, we’ll even give you a call after you place your order to let you know when your rifle will be arriving. Allowing you to go about your weekend, without having to wait by the door.

To get your air rifle delivered to your home, simply select “Home Delivery” at the checkout.

Order through our SSL secured checkout and collect from our shop in Rayleigh – safe and FREE!

The fastest way to get your air rifle is to order online through our SSL secured checkout and collect in person from our shop in Rayleigh.

It’s completely free, and you won’t need to break any of the social distancing rules to collect your gun – keeping you safe and saving you money.

Don’t Want To Travel? Collect From Your Local RFD

If you need your rifle as fast as possible, you can order online today and have it delivered to your nearest RFD (Registered Firearm Dealer) for collection.

We have a comprehensive network of RFD’s throughout England, Scotland and Wales that allow us to deliver your rifle almost to your door (usually within 3 miles) for you to collect at your convenience.

This is a service provided as a favour by your local shop, for which they charge a nominal handover fee of up to £25 – This is payable upon collection of your rifle.

Our delivery charge is just £22.95 and we’ll get your gun delivered to the RFD by the times shown below (subject to stock levels):

To get your air rifle delivered to your nearest RFD, simply select “RFD Collection” at the checkout.

Note: Customers in Scotland, please make sure you have your air gun permit before purchasing. This does not apply to England & Wales

The AirGun Centre offers a range of finance options to best suit your needs.

Find the product(s) you want to purchase from The Airgun Centre and add them to your basket.

You will be redirected to the finance provider to apply for your finance, once approved your order will be confirmed and prepared for dispatch or collection.

We have 2 finance providers available for you to choose from, DEKO and Payl8r.

Deko is a credit broker, not a lender. Deko’s secure technology helps put you in touch with lenders whose finance options are best suited for you and your purchase. As a customer of The AirGun Centre, your finance application will be with Duologi.

Deko offer a range of finance options to help you spread the cost of your purchase over 12 to 48 months. The value of the loan needs to be over £250 and no more than £15,000. You can choose a deposit of up to 50% of the value of the goods.

How To Apply For Deko Finance

Payl8r can lend based on your affordability alongside your credit history, which allows them to review and accept many customers throughout the UK.

Applying won’t affect your credit score as Payl8r uses a “soft search” when you apply – meaning there’s nothing to lose!

How To Apply For Payl8r

*Failure to keep up with repayments will negatively impact your credit score.

The Airgun Centre's unique guarantee has been included with all our rifles and pistols for over 40 years now , there are: no catches, no small print and no hidden charges it's as simple as this if your purchase develope's any defect at any time we will repair or replace it completely free of charge this cover's parts and labour (The AirGun Centre Guarantee and service pledge only applies to the original purchaser).

The Airgun Centre's unique free service plan has been included with all our rifle's for over 40 year's , there are no catches, no small print and no hidden clauses it's as simple as this when your rifle's performance goes "off the boil" you simply return it for a service , it's completely free of charge this cover's part's and labour (The AirGun Centre Guarantee and service pledge only applies to the original purchaser).

We stand confidently behind our products, and believe that the goods you purchase from us are the best available on the market. That is why we are happy to provide you with a unique guarantee.

We are proud to have included this as standard on all pistols and rifles sold by us for over 40 years. This gives you complete peace of mind when purchasing from us, meaning you can buy with confidence knowing that if for any reason your product has any defect we will repair or replace it completely FREE.

There are no catches, no small print and no hidden terms and conditions, it really is as simple as it sounds.

This unique guarantee covers both parts and labour, so you can rest assures that when you buy from the best you will get the best. (The AirGun Centre Guarantee and service pledge only applies to the original purchaser).